The Focht Chamber System 3 (FCS3 ®) is a closed system, live-cell micro-observation flowcell chamber that offers several advantages over other chambers. In addition to its unique perfusion and thermal control system, it is fully compatible with all modes of microscopy. It is also the only chamber to combine high-volume laminar flow perfusion rates with Koehler illumination and precise temperature control without an air curtain. Its user definable flow characteristics make it adaptable to nearly any protocol where cells are perfused in a flow-cell.

*for heat will require FCS3 Controller

The FCS3 is a flow cell or flow chamber that is designed specifically for the demands of today’s live-cell imaging requirements. It has limitless flow characteristics because its flow geometry can easily be customized by the user. It can provide low shear near laminar flow as well as high shear in a directed flow and anything in between. The most important feature of the FCS3, other than unequalled temperature uniformity, is that there is a precise directed flow of media over the cells. Open dish type chambers do not provide the flow capabilities of the FCS3. The FCS3 provides an optical imaging cavity where the user can precisely define the optimum flow characteristics necessary for the experiment.FCS3 users enjoy the following characteristics: 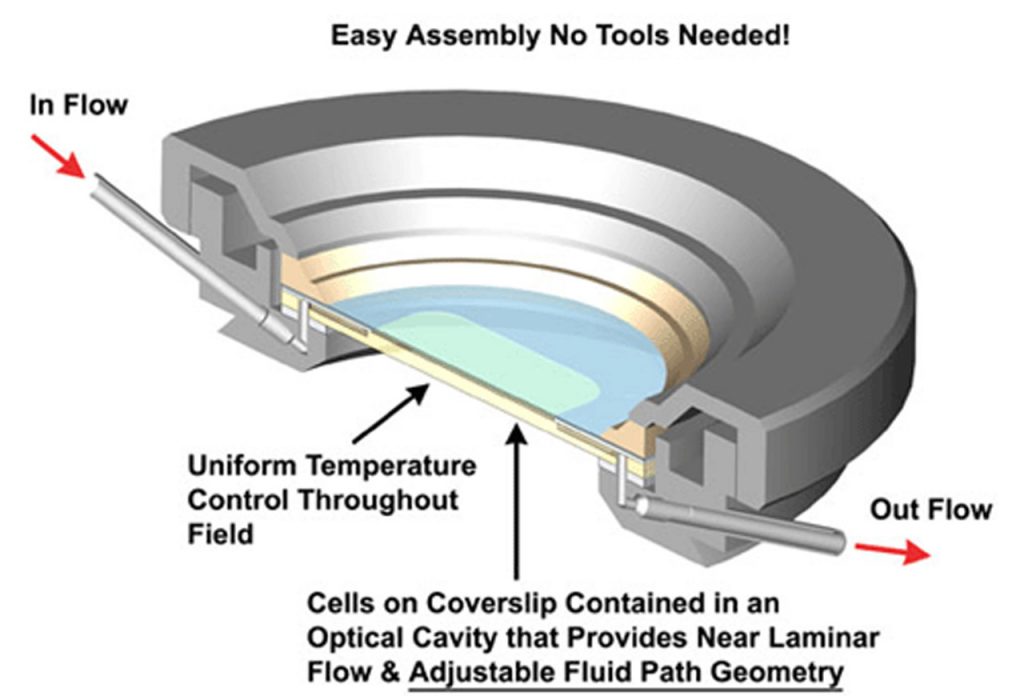 Cells are grown on a 40mm glass coverslip. This coverslip is then incorporated into a perfusable fluid optical cavity that is compatible with all modes of microscopy, and its geometry can be easily defined by the user. This optical cavity is secured into a fixture on the stage of the microscope where media can be perfused or remain static.
When media enters the chamber, it is prewarmed, then emerges into a fluid optical path where the media is precisely directed over the cells. The media is collected within the optical cavity and directed out of the chamber on the other side. The flow characteristics of the media in the optical cavity are easily modified by selecting gaskets of varying geometry that direct the flow. Temperature control is maintained by both peripheral thermal support from the chamber metal frame and heat that is emitted from an electrically conductive optically transparent coating on the Microaqueduct “window” of the optical cavity. This technique provides uniform temperature control across the entire field, thus eliminating the temperature gradient that occurs with other designs. This technique also enables the FCS3 to recover from perfusion induced temperature fluctuations in just seconds.

Temperature Control:
The FCS3 was designed to maintain accurate thermal control and allow high-volume laminar flow perfusion. Both of these functions are incorporated into our patented Microaqueduct Slide (see drawing below). The surface of the Microaqueduct Slide, opposite the specimen side, is coated with an electrically conductive, transparent, thin film of Indium-Tin Oxide (ITO), and two electrical contacts (busbars). When the FCS3 is completely assembled two electrical contacts, (not shown in drawing), which are contained in the electrical enclosure rest on the busbars. A temperature controller is used to pass a regulated current through the ITO Coating. This causes the surface of the slide to heat. The heat is transferred through the media to the cell surface on the coverslip thereby providing direct thermal control. The self locking base of the chamber is also temperature regulated to provide peripheral heat as well. 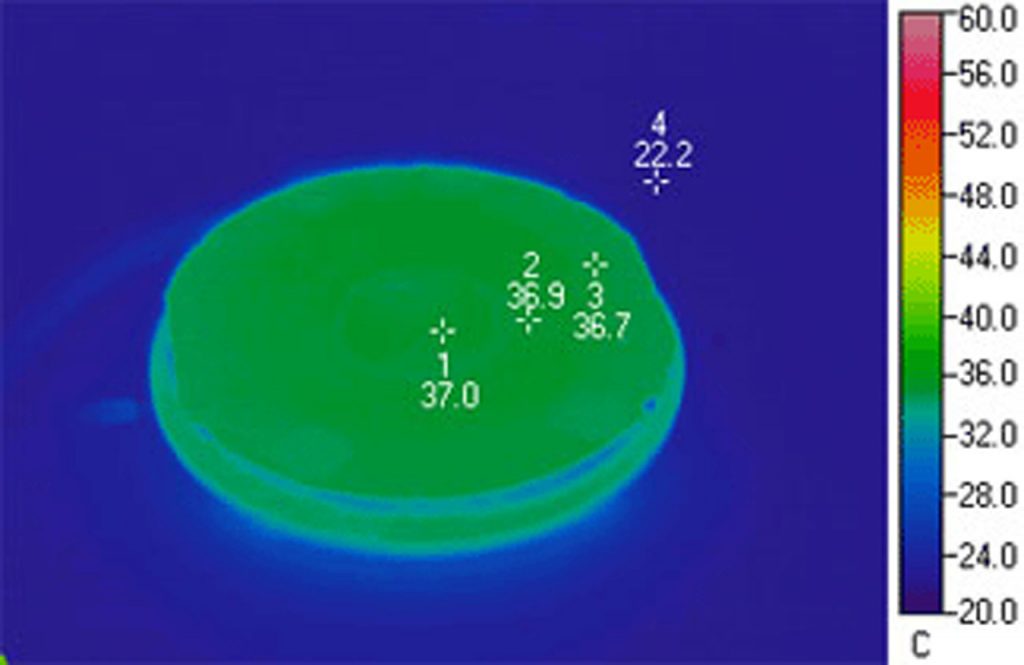 The thermograph above demonstrates the uniform temperature distribution of an FCS3. Notice that the coverslip temperature is so uniform that its location, in infrared, is indistinguishable from the base of the chamber. This demonstrates the effectiveness of the ITO heated Microaqueduct Slide. It is capable of re-equilibrating cell temperature within seconds of perfusion and eliminates the typical thermal gradient that occurs with peripheral heating.

Microaqueduct Perfusion:
A fluid pathway is formed by separating the Microaqueduct Slide from the coverslip containing cells with a single silicone gasket. This gasket can be any thickness from 50 microns to 1mm and any lateral geometry you choose or create. This arrangement allows the user to define the flow characteristics within the optical cavity formed between the micro aqueduct slide and coverslip. Therefore, you are not limited by the geometry of the optical cavity. Instead you select or create it! Fluid access to this flow channel is made through two 14-gauge needle stock tubes protruding from the sides of the chamber base These tubes provide fluid connection to two perfusion holes in the Microaqueduct Slide that interface two “T” shaped grooves cut into the inner surface of the Microaqueduct Slide. The “T” groove allows the media to seek the path of least resistance and become nearly laminar before flowing across the cells. This technique eliminates the need for the metal perfusion ring and additional gaskets, which are the limiting factors, required by most conventional chambers. (see drawing below) 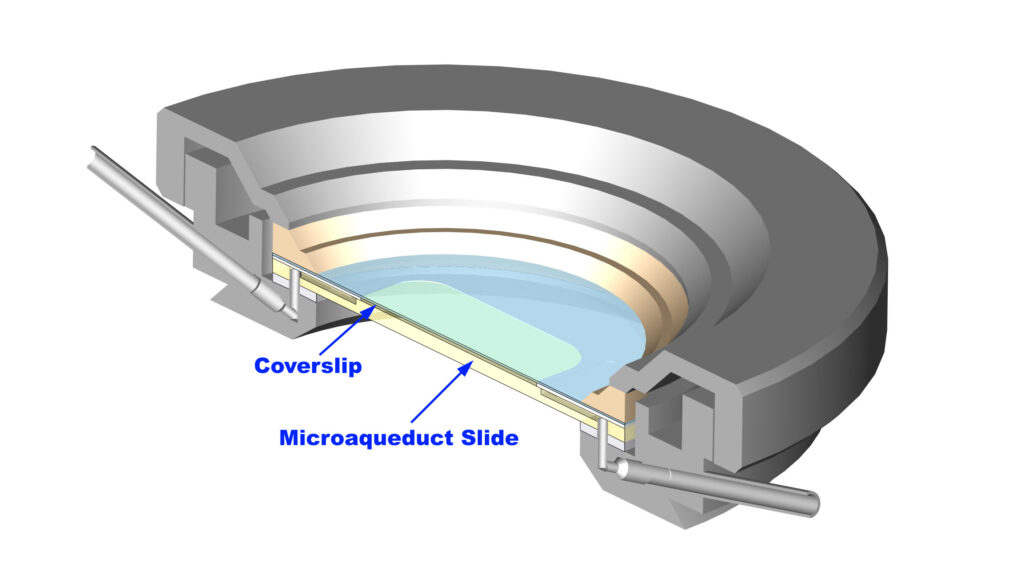 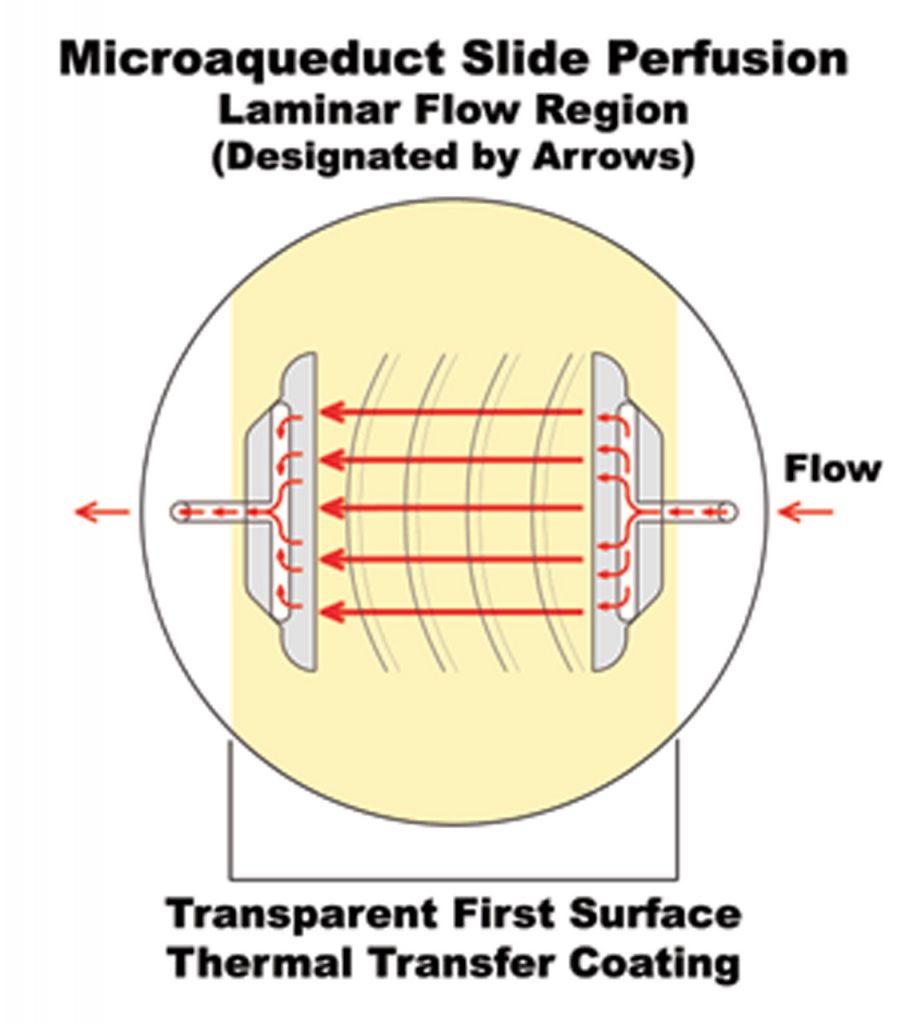 By simply changing this one gasket you can change the volume of the chamber. This gasket can have any internal geometry you desire and can be any thickness from 0.1mm to 1mm. The drawing below shows the standard shapes of the gaskets that we include with every FCS3. We also include solid gaskets for you to custom fit to your application. Once you have found the shape that works best for your experiment you can contact us to have a die made to those specifications. Examples of standard gasket outlines (right) 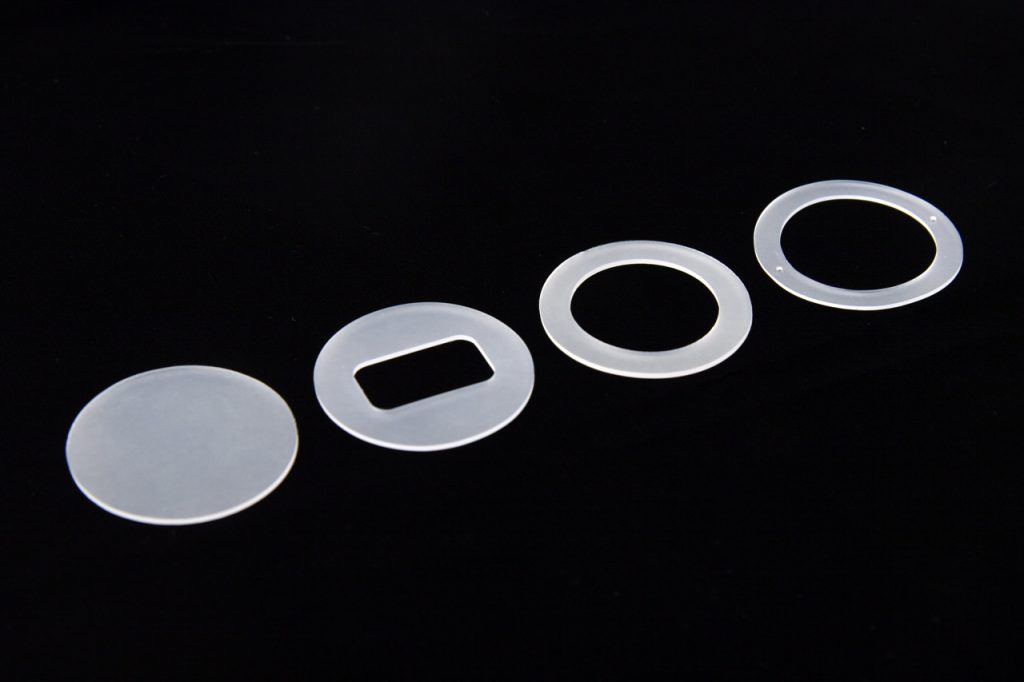 By simply changing this one gasket you can change the volume of the chamber. This gasket can have any internal geometry you desire and can be any thickness from 0.1mm to 1mm. The drawing below shows the standard shapes of the gaskets that we include with every FCS3. We also include solid gaskets for you to custom fit to your application. Once you have found the shape that works best for your experiment you can contact us to have a die made to those specifications. Examples of standard gasket outlines (below) 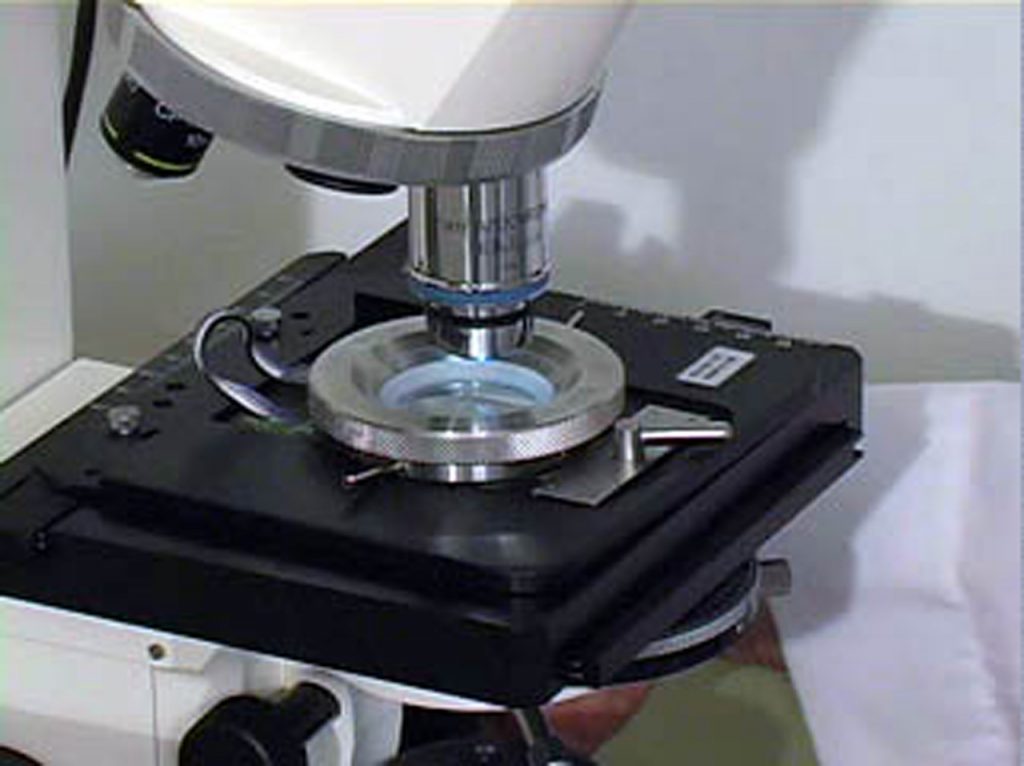