The only stage warmer with z axis stability for imaging

The Stable Z System is an electronic specimen warming device that applies heat exclusively and immediately adjacent to a specimen containing structure such as a 35mm culture dish or LabTek chamber slide in a manner that does not induce Z-axis drift to the specimen plane. It is comprised of a small electronic controller supported at 45 degrees for easy viewing, a DC adapter power supply, and a stage adapter to fit the microscope. 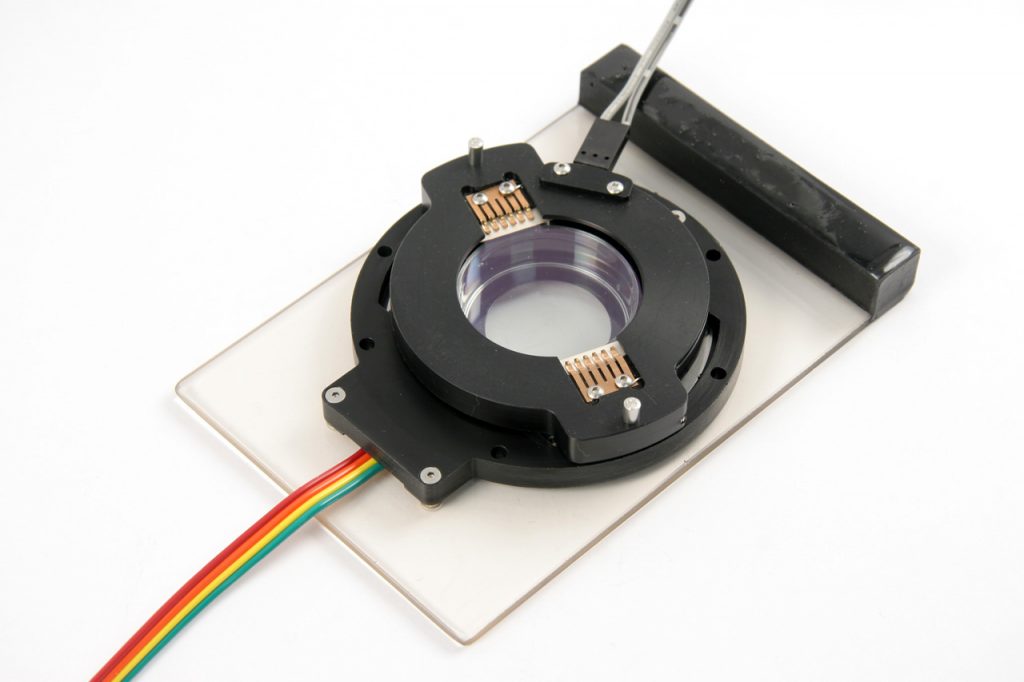 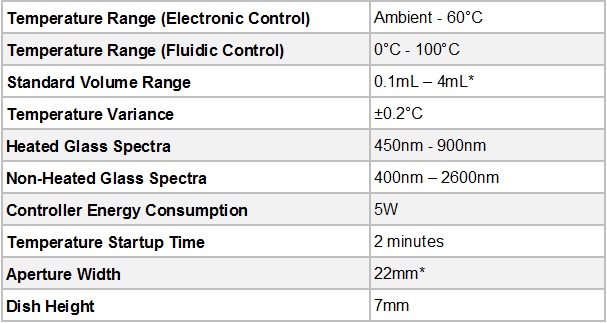 The best stage heater for imaging

There are several factors that make the Stable “Z” superior to traditional “stage heaters”.
When a material is heated it expands. This is why other “stage heaters induce thermal drift. However, within the heated core components of the Stable Z, there is a nodal plane from which thermal expansion occurs. The perimeter of the Stable Z’s heated core, which is also the mechanical support surface for the heated core, is machined to this nodal plane. Then the specimen resting surface is machined down to the same level. The exposed nodal plane is attached to a glass plate having a near zero coefficient of expansion and poor thermal conductivity. Therefore, heat produced in the core of the device is isolated from the microscope. Therefore, even though heat is being applied to the specimen from a metal, peripherally located source, the effect of thermal expansion is not transmitted to the specimen plane because the support surface, nodal plane within the heating core, and specimen are all coplanar with each other and stay that way. 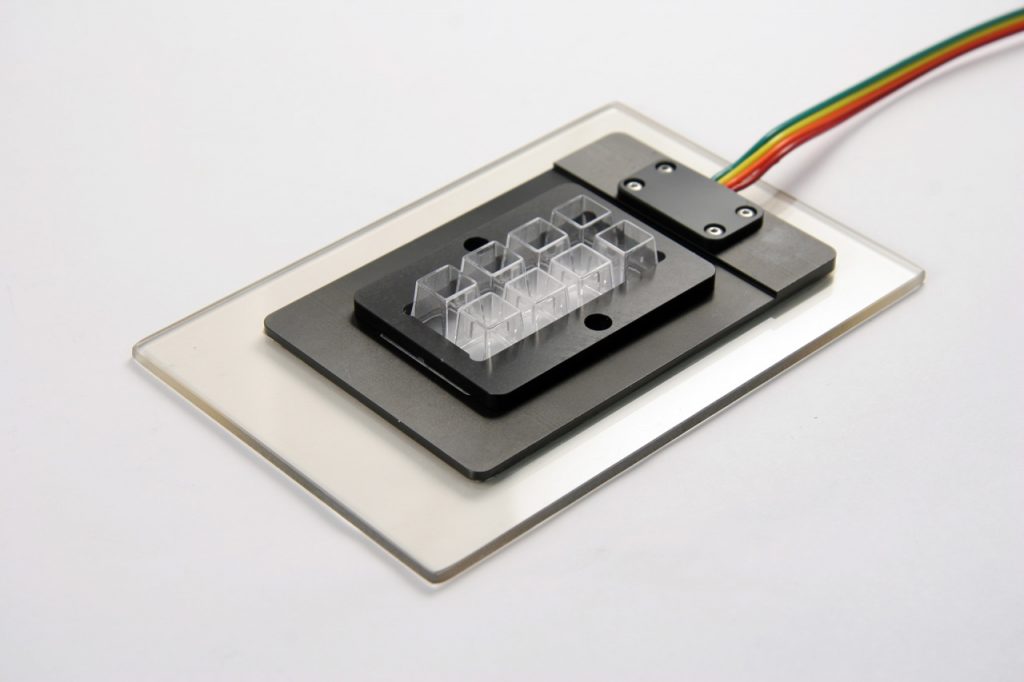 Images remain in focus for imaging 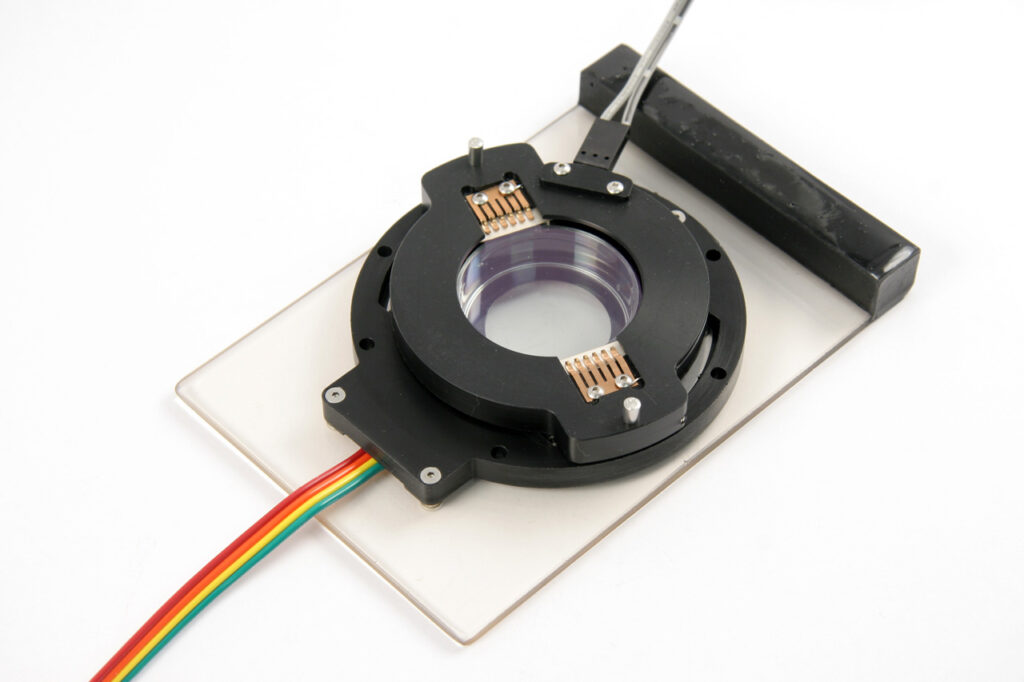 The heated specimen retainer is made of a minimal thermal mass and efficiently heated to minimize conductive and radiative heat transfer to the microscope stage. There is also a means of adjusting the relationship between the specimen plane and the support surface for the heated core to compensate for the position of the specimen plane in various brands of dishes. The glass carrier plate that supports the heated components does not contribute to Z axis drift because it has a near zero thermal expansion coefficient. The result is the most stable and economical method of warming a specimen for time-lapse imaging. The only limitation is that as heat is applied peripherally. Therefore, you can expect a thermal gradient, but no more or less than any other traditional “stage heater” that does induce Z-axis drift. 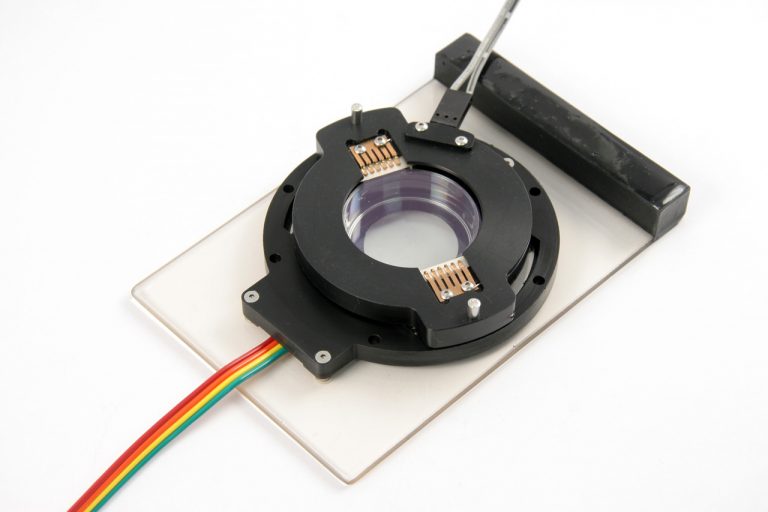 The Stable “Z” is ideal for those who use standard plastic ware dishes and do not need a highly integrated micro-environmental system or simply need to keep their specimens warm for short periods of time while on the scope. The Stable “Z” outperforms traditional “stage heaters” and is available at an unbeatable value. Not everyone needs the sophistication of a high-end Delta T Dish System, or the expense that comes with it. Therefore, Bioptechs has developed a very competitively priced specimen warming system that accommodates any brand of 35mm dish and provides superior thermal control with the exclusive feature of Z-axis stability for time-lapse applications. If you need a specimen warmer or if you are still using a traditional “heated metal plate” to warm your specimen, contact Bioptechs for a demo.

The ICD Heated Lid controls temperature, humidity and perfusion for you sample in the Stable Z Interchangeable Coverslip Dish

The Labtek Multi-Well Heated lit creates a closed chamber for your multi-well experiments with gas ports.

Add a Stable Z to your lab

If you are imaging with a high numeric aperture objective, which requires an optical coupling medium, you will also need to warm the objective to prevent it from acting as a thermal sink to your specimen. When warming an objective it is critical to apply heat to the most efficient thermally receptive location on the objective and incorporate the objective as part of the control loop. These characteristics are exclusive to the Bioptechs Objective Heater to prevent overshoot and establish accurate control. To reliably and continually perfuse the dish the Delta T micro-perfusion pump is highly recommended. It will deliver media to the dish at a rate slower than it is removed so the dish cannot overflow. You simply adjust the height of the pickup needle to the level you want in the dish. This simple configuration is easy to set up, easy to maintain and will offer years of reliable data collection.
Request a Quote